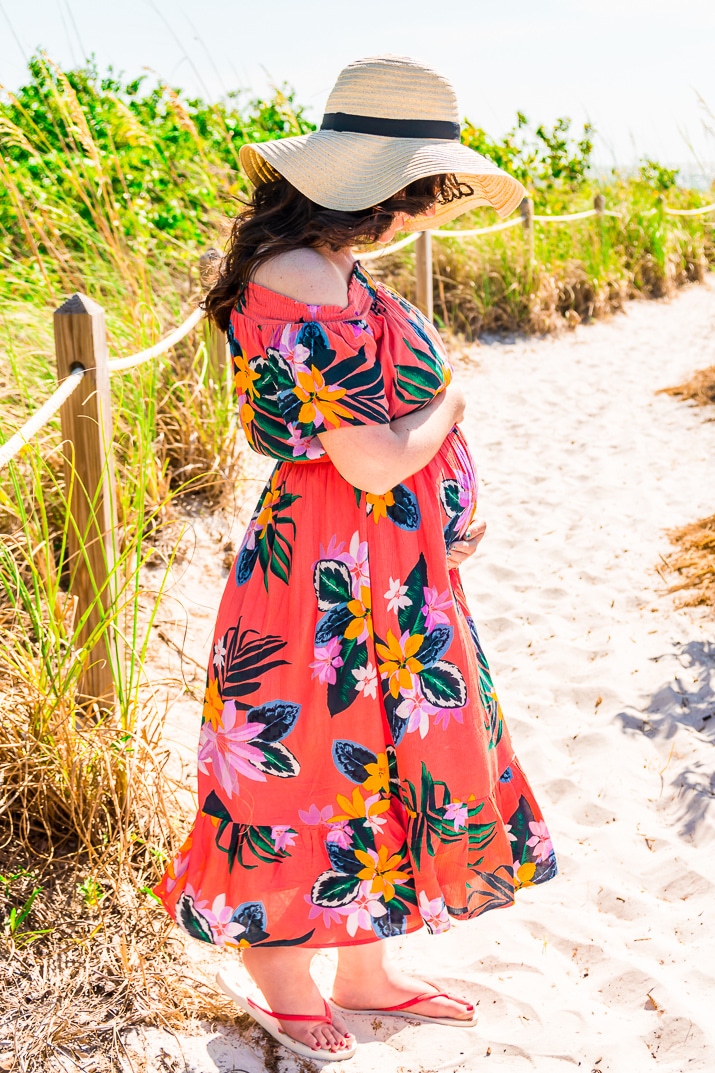 As I mentioned in my announcement post last week, we found out I was pregnant really early and the symptoms set in almost immediately after I found out, actually, I’m pretty sure that they started the day before I found out because I was moody as hell.

I’m halfway through the second semester at the moment, but I figured I’d go back and recap how the first one went. And honestly, it was a little rough. And I’m sure most moms can relate to that.

This recap might be a little scattered because I was awful at writing things down while they were happening and It’s been a couple months. And it probably includes a dose of TMI… so… you’ve been warned.

I found out I was pregnant on January 29th, I was 4 weeks along (2 weeks since conception) and for most of February I was super moody and extra paranoid. It was hard for me to get excited or attached because I was honestly so scared that something was going to go wrong.

I’m a bit of a control freak and this was the first time in my life where I felt like something was completely out of my hands and it freaked me out a little. I still had a good amount of energy, so I threw myself into my work to keep me distracted from all the “what ifs”.

During week 6 I came down with a head cold, but luckily it didn’t last long and was probably the nicest cold I’ve ever had.

I ate really well in February, breakfast consisted of grapefruit or oranges with avocado and whole grain toast with scrambled eggs. Lunch was usually pretty light, salads, banana, smoothie, chicken, and rice. For dinner, we were still doing Hello Fresh three nights a week and tried to only eat out once a week.

I have primarily drunk water during my pregnancy but enjoyed virgin mojitos when we were around friends and family so they wouldn’t catch on.

You guys know I have a serious sweet tooth, but it’s pretty much non-existent and has been since mid-February. I actually lost 6lbs during my first trimester and have just this week finished gaining them back. But I’m considered slightly overweight so I’m hoping that that will help me stay on track for a healthy weight gain throughout the pregnancy.

I really didn’t have any morning sickness in February, other than feeling a bit tired, not wanting sweets, and having insanely sore breasts, I didn’t feel overly different. Oh, except the mood swings, those were extra real in the beginning, sorry, Matt!

And I also had to pee a lot more frequently and it’s only gotten worse since! 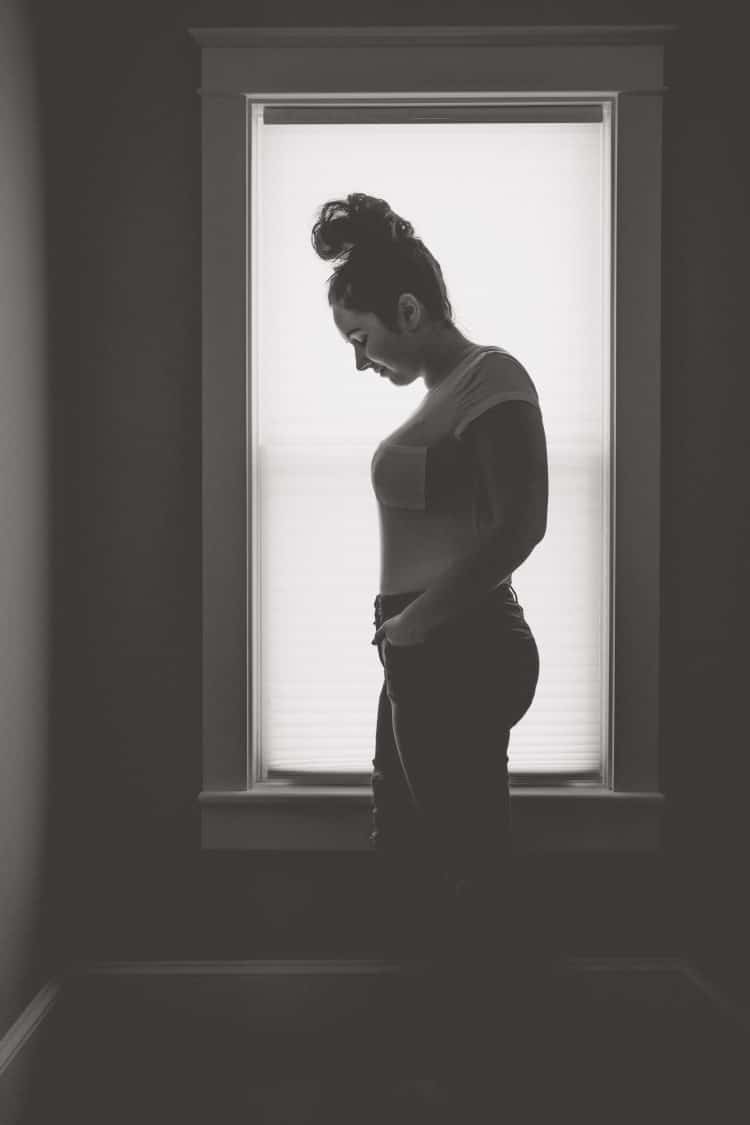 This is where the exhaustion hit. Like there were weeks where I didn’t get out of bed, for most of March I put myself together enough on one weekend day to make an appearance in civilization. The rest of it was spent in comfy clothes binge watching Jane the Virgin, Chicago Med, and Heartland.

I was pretty good about taking weekly photos and journaling until this point too, but then I just didn’t have the energy.

During week 8 I invested in a pregnancy pillow because I was not sleeping and it helped a ton. I used it regularly up until about a month ago when I was more comfortable without it, but I have a feeling I’m going to need it again real soon.

I threw up for the first time during week 9 when I was brushing my teeth, but otherwise, didn’t have any vomiting. My morning sickness was mostly that I didn’t want to be vertical since it made me a little nauseous.

We told our parents during week 10, you can watch the video of us telling Matt’s parents below!

My diet sort of went to shit this month, I made sure I was still getting my protein, fruits, and veggies, but pasta and french fries were my best friend.

I honestly wouldn’t say I’ve had real cravings for anything, Matt would say otherwise, but me feeling up to something and me being willing to commit a crime for something are two totally different things. I did have a major craving for fried chicken during a major snowstorm, good thing the closest KFC is less than 2 miles away, thanks, Matt!!!

Week 11 brought my normal prenatal blood testing and our first trimester screening (usually 3 parts). We were left a bit sour with our healthcare system after the screening ultrasound that ultimately caused us not to follow through with the rest of the screening and to look for other care options. See week 12.

In all honesty, this whole month was just a blur. I was exhausted and bored and that pretty much sums it up.

Week 12 brought a bit of a reprieve from the exhaustion, although I still had an afternoon nap during a couple of days. But it felt good to be up and about a bit more and I finally felt human again.

Around 11 – 12 weeks was when we started questioning whether or not a hospital birth was right for us and met with a birthing center. Ultimately, the birthing center was a little less right for us given the point we were at in the pregnancy, so we decided to stick with the hospital.

But the meeting with the birthing center really made us realize that we needed to be our own advocates in the healthcare world. As two young and healthy individuals, Matt and I hardly go to the doctor, and since our primary care provider is out of the system, we pay cash, which means we hardly dealt with our insurance at all prior to all this. So it’s been a bit of an eye-opener, I mean, we all know the system is broken, but you don’t realize just how broken until you’re using it.

So it was time to start getting the answers we needed from my regular OB/Midwife, drilling her with a million questions during our next appointment helped to give me some reassurance, which was needed. This period of research was very eyeopening and made me realize that while I have a fairly low pain tolerance, I do want to avoid an epidural if at all possible.

During week 13, we bought and set up our crib and dresser and got the nursery painted. I also started our registry. This made things start to feel really real!

However, by the time week 14 rolled around, I had another extreme wave of exhaustion that hit me and I spent a few days laying low.

While I still haven’t had any serious cravings, this was around the time when my love for Starbucks Bacon Gouda Sandwiches, strawberry banana smoothies, and watermelon heightened and I still love them all.

We told the rest of our family on Easter, just a few days after I hit 12 weeks. We also found out that 3 of our cousins are also expecting and we’re all due between mid-September and mid-November, so that’s fun! I didn’t really have cousins my age, so I’m excited that our little will!

I was able to wear my regular jeans throughout the first trimester with a few nights of the elastic band trick.

In all honesty, the first few months of pregnancy were not as bad as I was expecting, but they were also a blur and I should have done a better job documenting them. But I’m going to try and do better so these bumpdates are a little more organized in the future!

Things that Helped Me Survive the First Trimester: