It can be hard to make wholesome breakfasts that the family loves, but Raspberry Almond Baked Oatmeal is a game-changer!

Waffles, pancakes, and French toast are always delicious, but sometimes, you may want a healthier option.

This Baked Oatmeal Recipe has all the heartiness of oatmeal with just enough sweetness.

It’s also flavored with juicy red raspberries, almond extract, and brown sugar, plus a touch of warm cinnamon and nutmeg.

How To Make Baked Oatmeal:

This is a simple dish to make. You’ll begin by toasting your almonds, if desired, you don’t have to but it does enhance the nutty flavor they will add to the dish.

Then you’ll add the frozen raspberries to the baking dish, making sure to spread them evenly so they cover the bottom of the dish.

Gently pour the mixture evenly over the top of the ingredients already in the baking dish. Do not stir and try to avoid disturbing the distribution of the raspberries, oatmeal, or almonds too much.

Bake until the liquid has been absorbed, about 25 to 30 minutes.

If you’d like to add bananas to this dish, slice them into rounds and arrange them on the top of the oatmeal. Sprinkle the brown sugar and nutmeg over the top of the bananas and broil the Baked Oatmeal for a few minutes to caramelize the bananas.

While I love the blend of raspberries and almonds in this recipe, you could easily make this with a bag of mixed berries, strawberries, or blueberries if that’s your preference.

It’s easy to swap out almond extract for vanilla extract or use unsalted butter instead of coconut oil.

You can also use another milk alternative or even whole milk if you’d like in place of the almond milk. But I really love having all the different layers of delicious almond flavor!

This yummy breakfast is great for a healthier brunch option to make for the family on the weekends.

But with just enough sweetness and a dessert-like texture, the kids won’t even suspect it’s good for them!

I especially love this comforting dish in the wintertime. When it’s cold outside, there’s nothing like a steaming hot breakfast on a frigid morning.

Paired with a mug of steaming coffee or tea, cozy Baked Oatmeal will warm you from the inside out.

Sometimes, I even like a scoop of this stuff as an afternoon pick-me-up. It also makes a great after-school snack that’s healthier than chips or cookies.

They say breakfast is the most important meal of the day. But sometimes, it’s the hardest one to get your family (or yourself!) to eat!

Whether you have picky eaters or you need a healthy breakfast or brunch option, your family will love this fruit-filled Raspberry Almond Baked Oatmeal Recipe! 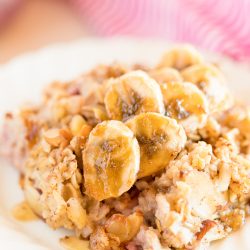