Instant Pot Pot Roast is a fast and delicious homestyle dinner recipe that’s ready in about an hour with an Instant Pot or eight hours with a slow cooker. Loaded with carrot, potatoes, celery!

Even though we experienced a few spring-like days last week, this morning’s chilly wind assures me that winter is going to hang in there a little while longer.

And when it’s cold, is there anything more comforting than pot roast? Pot Roast is one of my all-time favorite dishes, on my 18th birthday my mom had to hunt down a dutch oven so she could make it for me.

But we don’t always have time to watch it bake in a dutch oven and we’re not always prepared enough to be able to pop the ingredients in a slow cooker in time for dinner six to eight hours later. So when I got my Instant Pot, it was a game-changer!

How many of you have heard of Instant Pots? The seemed to have become all the rage since early last fall and in the beginning, I thought they were going to become another passing fad, so I held off on buying one.

How many of you have heard of Instant Pots? The seemed to have become all the rage since early last fall and in the beginning, I thought they were going to become another passing fad, so I held off on buying one.

And Instant Pot is an electronic, programmable pressure cooker, that is easier and safer than the ones you see people throwing across the kitchen in Top Chef.

But months later, all of my friends are still raving and Instant Pot recipes are all over my facebook feed, so I caved, and I bought one. And I LOVE it! So of course, the first thing I was going to make in it was my traditional Pot Roast!

I am so impressed with this machine! It cooked my pot roast to perfection in about an hour, way better than the four to eight hours it takes in a Dutch oven or slow cooker!

And just look how tender that meat is! In just over an hour, the roast is nearly falling apart.

If you’re gentle, you can remove it from the pot to slice if you’d prefer, but the way I love it most is tearing it apart in the pot and swirling it together with the vegetables and delicious gravy for a hearty bowl of comfort food.

Don’t forget the dinner rolls to sop up all that extra sauce with when you get to the bottom of the bowl!

This recipe makes enough for at least eight adults, for Matt and I, we love making it once a month and having leftovers all week long!

The best part is that it’s all made right in the Instant Pot, no extra dishes aside from tongs and spoon and the dishes you serve it in.

I guess you’ll probably use a knife and cutting board to dice the vegetables, but you get the idea. It’s an EASY dinner! 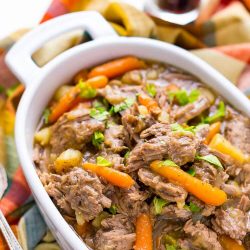