Apple French Toast is like dessert for breakfast, made with pan-grilled French bread that’s stuffed with a luscious mixture of apple pie dip and creamy mascarpone.

Whether for breakfast, brunch, or a special occasion, Apple French Toast definitely kicks traditional French toast up a notch!

This decadent recipe combines two classics: French toast and apple pie. It’s the perfect recipe to make on lazy weekend mornings, and you’ll be craving the caramel-apple goodness well into fall (and beyond).

What Is Apple French Toast?

This Stuffed French Toast recipe is made with thick slices of French bread and an apple and mascarpone filling. The apple mixture tastes like the center of a pie, consisting of tender apple chunks, brown sugar, caramel, and spices.

Truthfully, it would be more accurate to say that the French toast is a sandwich” as opposed to it being “stuffed.” That’s because the mascarpone and apple filling are placed between two pieces of bread, dipped in egg wash, then pan-grilled.

How Do You Make Apple French Toast?

Almond milk can be used in the egg wash instead of regular milk. Also, cream cheese or Neufchâtel (a French cheese) can also be used instead of mascarpone.

What Can You Serve Apple French Toast With?

The final touches on this pie French toast are completely up to you! Try adding a dollop of Whipped Cream of Cream Cheese Whipped Cream, a sprinkle of powdered sugar, or an extra drizzle of caramel.

This apple topped Stuffed French Toast recipe is an easy way to give breakfast or brunch an upgrade! Summer, fall, spring, or winter … your family will love diving into this tasty meal at any time of year! 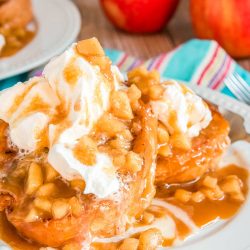