Cool Whip Ganache is just as creamy, thick, and rich as a traditional ganache recipe, but it has about 25% fewer calories!

So last weekend I made a cheesecake for Easter dessert, but it was missing something. It needed some chocolate, everything can always use a little chocolate, right? I was also trying to figure out just how I wanted to decorate my cheesecake, so I headed to my good ole’ friend, Google, and began searching for some inspiration.

I may have started drooling when I came across this recipe, I mean the ganache topping just looked amazing. I was out of heavy cream and the store was closed, but I clicked over to check out the recipe anyway and was shocked. NO FLIPPIN’ WAY! The ganache was made with COOL WHIP, not heavy cream! And I had some right in the freezer!

Therefore, enter Cool Whip Ganache – it might just be one of my favorite hacks ever! You know what the best part is – Cool Whip has 75% fewer calories per tablespoon than heavy cream. Which totally means we can indulge more and I’m a big believer in indulging!

I love ganache and all its rich chocolatey-ness. I could eat it straight from the bowl, no additional dessert fixings required. Especially my Bourbon Ganache, that stuff is divine! You can use ganache on cupcakes, cakes, cheesecake, and anything else that begins with the letter “C”. Just kidding, you can add it to anything! I highly recommend it on my Wacky Cake!

What you’ll need for this Cool Whip Ganache recipe: 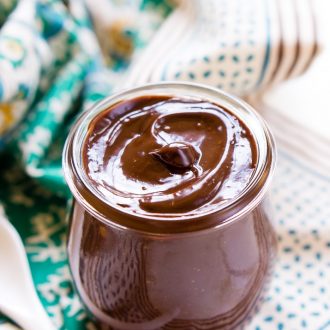 This post was originally published on April 8, 2015, photos were updated in August 2017.