This Impossible French Apple Pie is perfect for people who struggle with pie crust! Spiced apples and a crumbly pecan and butter topping make for a delicious dessert recipe!

In this genius recipe, the crust is built right into the filling and forms as it bakes. That’s because there’s a secret ingredient, and that’s Bisquick mix – you can even use my Homemade Bisquick Mix in this recipe!

It’s no secret that making pastry crusts can be a pain, but that shouldn’t stop you from baking homemade apple pies this fall! Try whipping up this Impossible French Apple Pie, which makes the impossible possible: you can create the perfect pie crust in a cinch!

This Impossible Apple Pie may not be the pie with the perfect flaky butter crust you had in your head, but I promise you it’s still absolutely delicious!

Plus it takes way less time and is a whole lot easier in my opinion! Thanks to this Easy Apple Pie recipe, you can make this family favorite throughout the year.

And don’t forget to serve it à la mode with a scoop of vanilla ice cream or a dollop of Perfect Homemade Whipping Cream!

How To Make French Apple Pie:

To make this Apple Pie recipe, the Bisquick mix is blended with eggs, milk, sugar, vanilla, butter, and salt, then poured over spiced apple slices.

Because you’ll use softened butter and not melted, the mixture will be a little lumpy, this is totally normal and it will bake up just fine!

Then, a topping made with more Bisquick, light brown sugar, chopped pecans, cinnamon, and butter creates the irresistible crumble that’s sprinkled on top!

As the pie bakes, the Bisquick in the filling makes the bottom of the pie golden brown, resulting in the easiest Apple Pie ever!

You may be wondering why this recipe is called a “French Apple Pie” as opposed to a “Dutch Apple Pie.” It all has to do with the taste and texture, especially when it comes to the crumble topping.

In general, French Apple Pies tend to have less sugar than Dutch Apple Pies, with the latter having a more pronounced brown sugar flavor.

What Is Impossible Pie?

Essentially, an impossible pie is a pie that’s made without a traditional pie crust and as it bakes, the filling creates a crust of it’s own.

Generally, this yeilds a soft but firm, pie crust or bottom that is easily sliced and holds together. You might enjoy my Impossible Pumpkin Pie too! 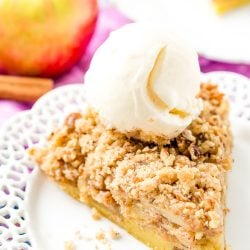 Rebecca Hubbell
This Impossible French Apple Pie is perfect for people who struggle with pie crust! This spicy and delicious recipe creates its own crust as it bakes!
5 from 13 votes
Prevent your screen from going dark
Print Recipe Pin Recipe Rate this Recipe