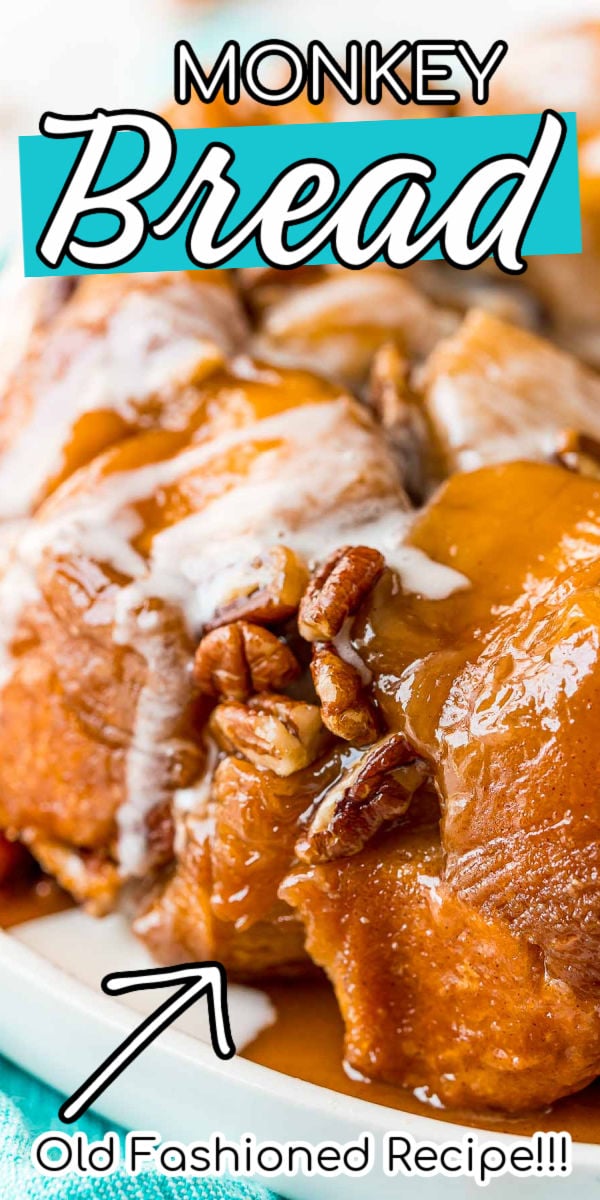 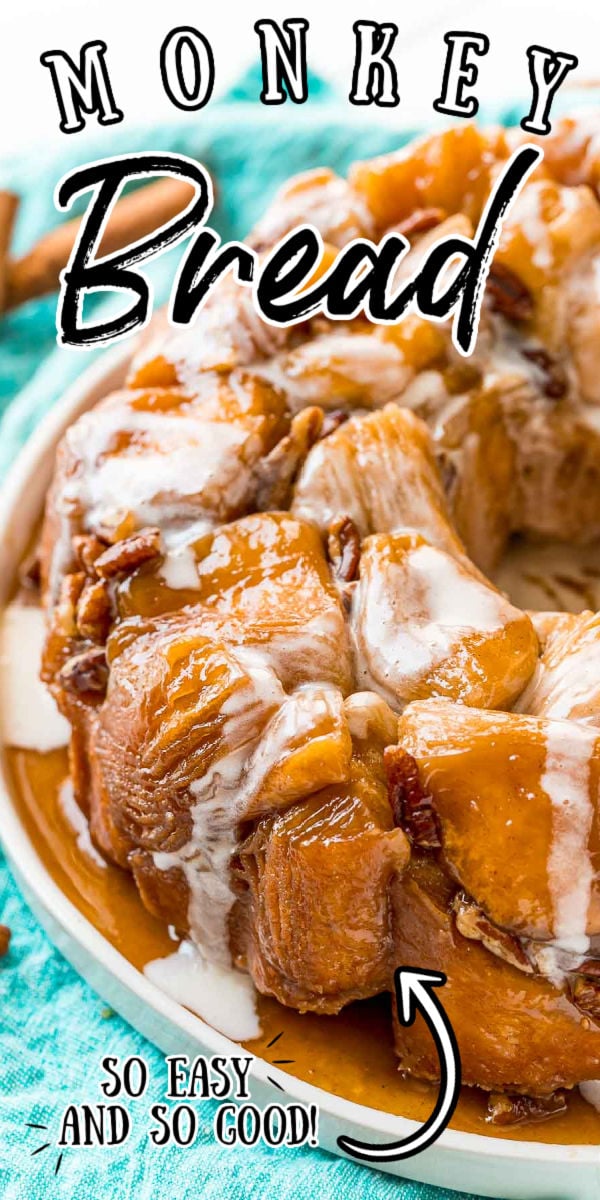 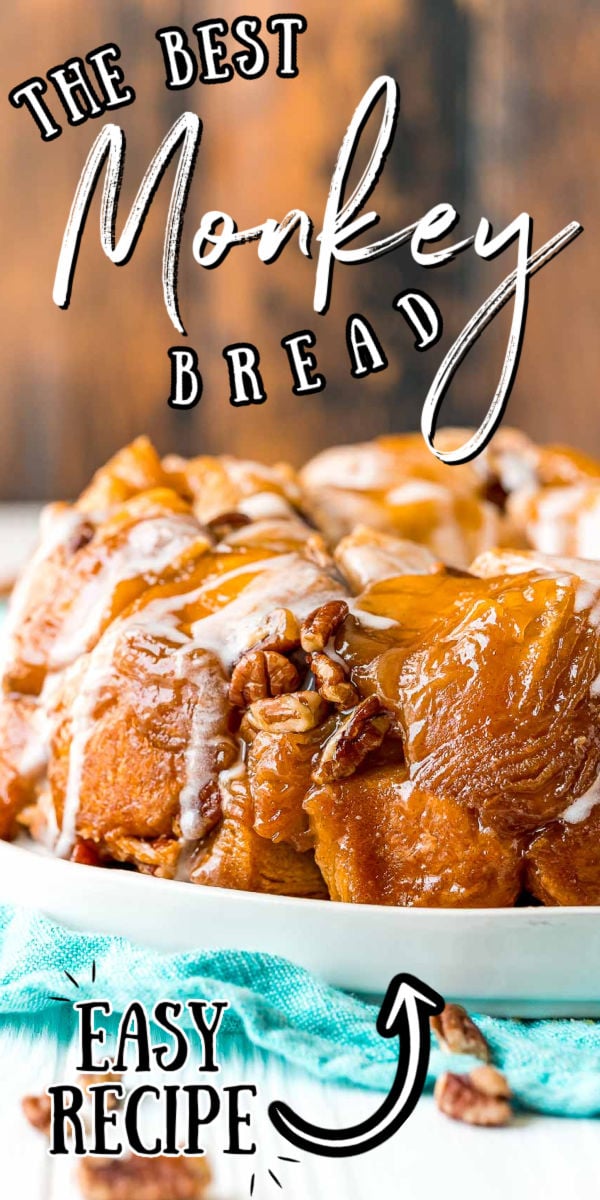 Monkey Bread is a pull-apart bread that’s insanely addictive! It’s made with soft biscuit dough that’s coated in cinnamon and sugar, loaded with pecans, and drenched in a sticky, sugary, butter sauce. The finishing touch is a drizzle of homemade vanilla icing.

Looking for a sweet afternoon snack, a decadent brunch dish, or something fun and delicious to serve for dessert? This easy Monkey Bread Recipe is a guaranteed hit!

Serve it warm to the family, and the whole thing will be gone in 20 minutes or less! I also highly recommend my Apple Fritter Monkey Bread that’s perfect for fall!

What Is Monkey Bread?

Also known as Pillsbury Grand Monkey Bread, it all starts with the dough from those moist, flaky biscuits!

They’re cut into balls of dough that are coated in cinnamon sugar, then drenched in a brown sugar butter mixture. Crunchy chopped pecans are added, and after baking the monkey bread, Homemade Vanilla Icing is drizzled on top!

While there are a lot of variations out there, this is the best Monkey Bread recipe if you ask me!

Biscuits – The base of this recipe is premade Pillsbury Grands Biscuit dough! It’s cut into pieces, coated in sugar, then layered in a pan with chopped pecans.

Coating – Each of the biscuit pieces are rolled in a cinnamon-sugar mixture with a dash of allspice.

Sauce – A melted butter and brown sugar sauce with a dash of vanilla and a splash of whole milk is poured over the dough. As it’s cooked, it becomes an ooey, gooey, caramel-like sauce!

Icing – The finishing touch is an optional drizzle of vanilla icing!

How To Make Monkey Bread:

Begin by preheating your oven to 350 degrees F and coating a bundt pan with nonstick spray.

Then cut your biscuits into quarters and roll them in cinnamon sugar until fully coated. Place them in the greased bundt pan. Add chopped pecans into the pan as you go.

Make your sauce in a small saucepan until the sugar is dissolved and the butter is melted. Pour the mixture over the biscuit pieces. I like to do a layer of sauce halfway through the biscuits and then the rest on top.

After the monkey bread is fully prepped, there should be able 1 to 1 1/2 inches of room between the biscuits and the top edge of the pan.

Bake the monkey bread until the top is golden and crisp the the center comes back mostly clean when a cake tester is inserted into it.

If you want to add even more decadence to this sugary sweet treat, flip the monkey bread out onto a large plate or serving platter and top with vanilla icing.

Expert Tip: Place a plate on the bottom of the pan while flipping to reduce the risk of the bread breaking. Also, removing the bread from the pan while it’s still hot will yield the best results.

Why do they call it Monkey Bread?

This pull-apart bread doesn’t require any utensils. Instead, you tear off chunks and eat it with your fingers, just like a monkey would!

Yes, the sauce makes it sticky, but that’s why it’s so fun to eat and share.

What can I use instead of a bundt pan for monkey bread?

A couple of loaf pans or round cake pans work, too. However, I wouldn’t recommend using a tube pan.

How do you know when Monkey Bread is done?

The dough will puff up and become golden brown and crisp on top. Also, a toothpick inserted into the thickest part should come out clean.

How long does Monkey Bread stay good for?

Store it at room temperature for up to two days … if it even lasts that long!

Can I use cinnamon rolls? 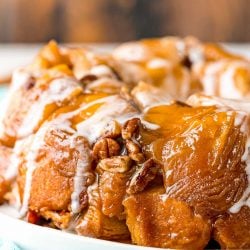