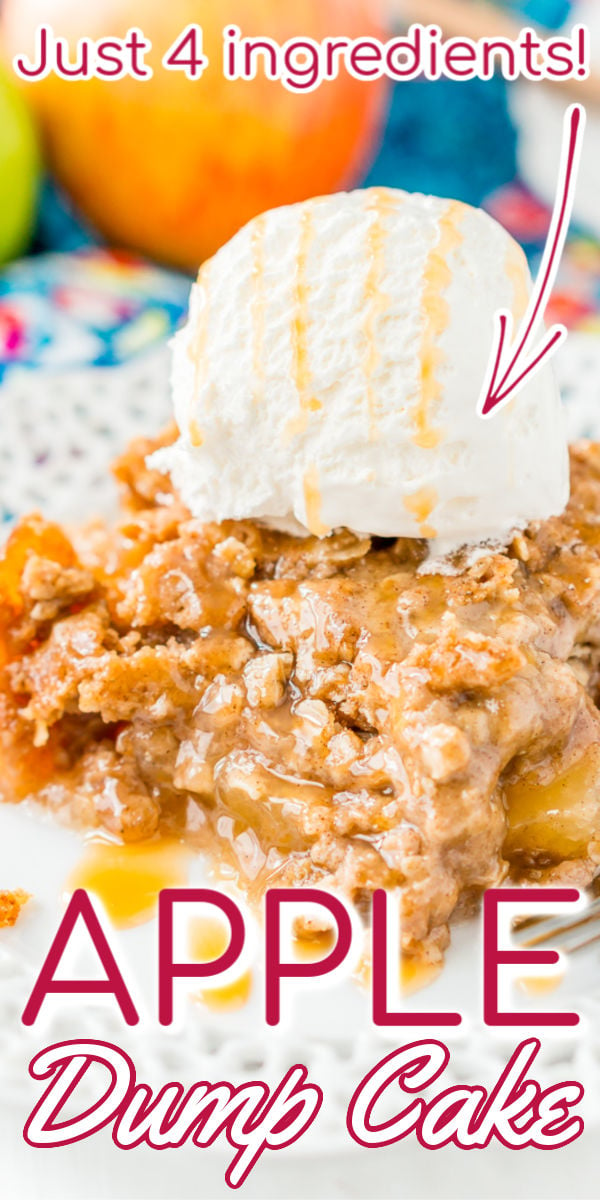 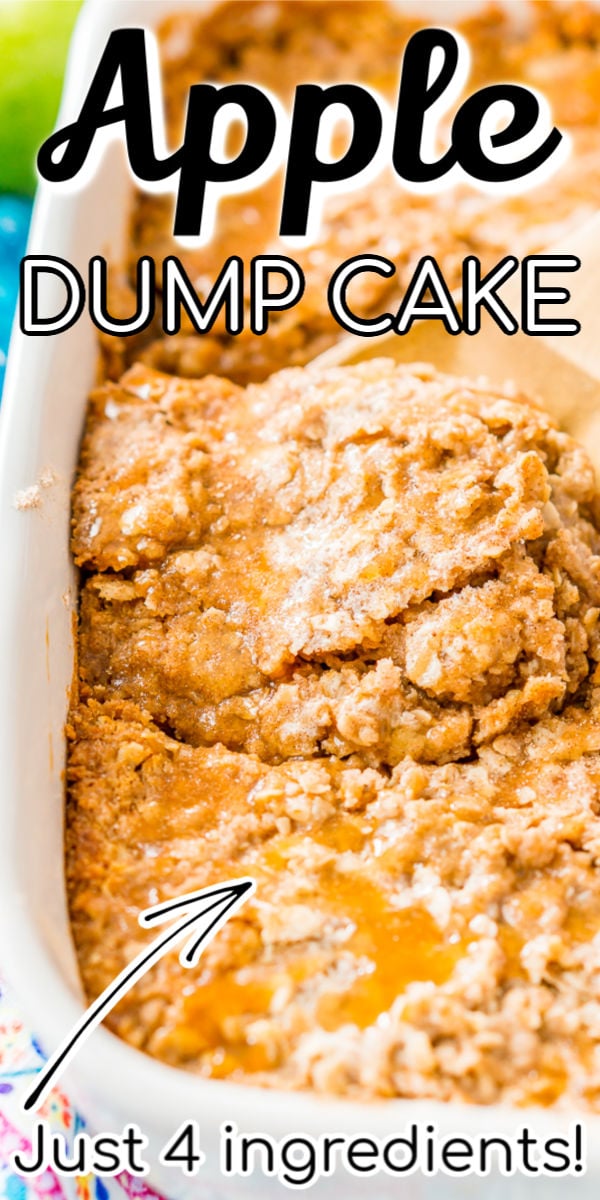 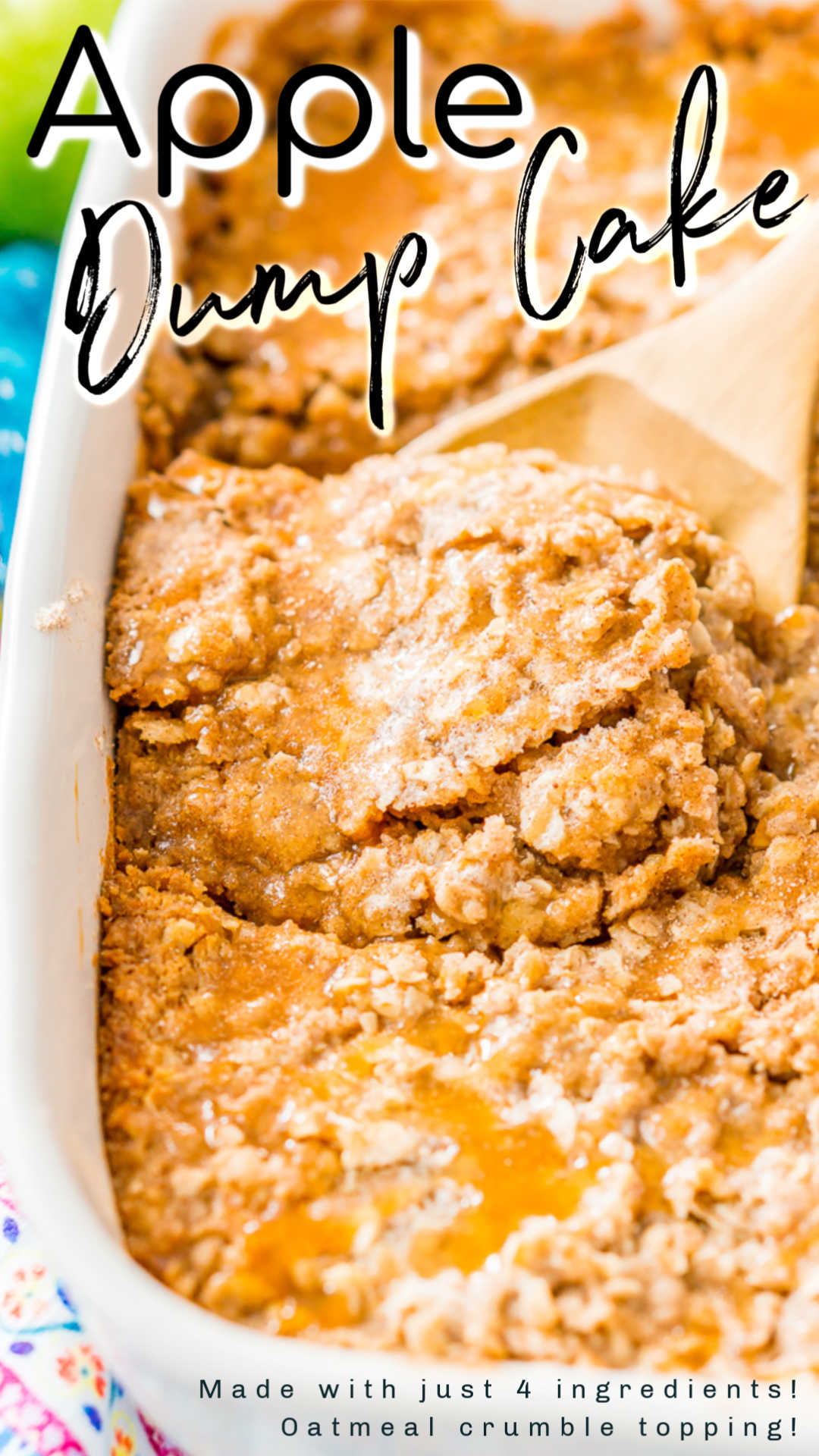 Apple Dump Cake is a 4-ingredient recipe that results in a delicious fall dessert that’s a cross between apple cake and apple crisp!

This Apple Dump Cake has to be one of the easiest apple desserts in existence, made with just four ingredients and a couple of optional garnishes!

It’s the perfect fall dessert to let the kids help make and so delicious that you’ll want to serve it up for Thanksgiving too!

I also like adding a sprinkle of cinnamon and sugar, and of course, a scoop of Vanilla Ice Cream or a dollop of Homemade Whipped Cream!

Since you don’t need fresh apples for this recipe, you don’t have to worry about peeling or dicing any fruit. You can also use a white or yellow cake mix instead of spice cake, but I love all that extra fall spice flavor!

What Is A Dump Cake?

Dump Cakes are a really easy recipe usually consisting of just a few ingredients, generally cake mix, fruit, and butter. The idea is that the ingredients can just be dumped into the pan (get it?!), stirred, and baked.

This Apple Dump Cake Recipe is made with two cans of apple pie filling, a box of spice cake mix, a cup of one-minute oatmeal, two sticks of butter, and there are a few customizations you can add if you’d like!

Apple Dump Cake is basically a cross between Apple Crisp and Apple Cake. But the recipe is even easier than either of these if you can believe it. It’s so simple, you can even throw one together on any weeknight to enjoy after a family meal.

But no one has to know how little effort it takes to make it. Apple Dump Cake is ridiculously good, so it’s the perfect treat to bring to get-togethers.

One of my favorite tricks is to whip up this dish before company comes over. The whole house smells like cinnamon-apple goodness. Pretty clever, right?

Make this cake once, and you’ll make it again and again! Festive, delicious, and super easy to make, this will become one of your family’s new favorite recipes!

If you’ve tried this recipe please let me know how you liked it in the comments below, I love hearing from you! I’ve also created a fun group on Facebook and I’d love for you to join in! If you’d like to check it out, you can request to join HERE. You can also Subscribe to my Newsletter so you never miss a delicious recipe again! 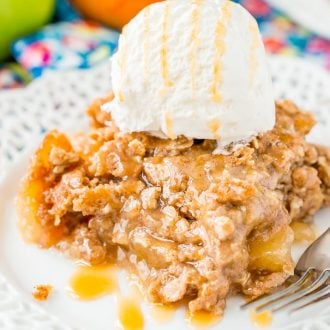