How to Make the Best Ever Moscow Mule Recipe with vodka, lime juice, ginger beer and a few extra ingredients that really take this classic cocktail to the next level!

If you’re more partial to whiskey (like me), I highly recommend trying my Irish Mule! Or you could make a Kentucky Mule by swapping the vodka for Bourbon.

Contrary to the origin indicated by its name, the Moscow Mule cocktail recipe is actually American by birth, not Russian. It was invented in the 1940s as a way to use up vodka, a relatively new import to the States, and a hard sell to the gin lovers of that time.

But they eventually came around. And here we are 70+ years later still making the same classic cocktail most of grandparents and great-grandparents were so leary to try.

But what is it about the Moscow Mule that has allowed it to stand the test of time when so many cocktail recipes have remained in the past? I think there are a few different reasons

Maybe it’s something else, but I don’t think I’m too far off with my guesses. I also think that since this classic drink helped vodka win over the love of Americans everywhere, that’s it simply iconic at this point.

What Is A Moscow Mule?

It’s part of the Buck cocktail family, which means that it combines either ginger ale or ginger beer with citrus and spirits. In this cocktail recipe, you use ginger beer, lime juice, and vodka. It’s also sometimes referred to as a Vodka Buck.

Where Did It Originate?

It was created in Los Angeles in the 1940s. At the time, Wes Price, the bartender of the Cock ‘n’ Bull, needed to clear out the bar cellar full of Smirnoff Vodka. Vodka hadn’t yet gained popularity and was a hard sell to patrons of the bar. So in an attempt to use up ingredients, the Moscow Mule was born.

Why Does A Moscow Mule Have To Be In A Copper Mug?

What started as a marketing ploy has turned into a key component of this classic cocktail. There are three main reasons why the drink is still served in a copper mule mug (affiliate link) to this day.

1. Temperature – Metal takes on the temperature of the drink quicker than glass, leading to an extra-cool sensation when drinking.

2. Taste – This one might be up for interpretation. But some say that the copper begins to oxidize when the vodka hits it. This enhances the drink by slightly boosting the aroma and taste of the vodka.

3. Presentation – Let’s face it, they look pretty, and these days you can find copper mugs EVERYWHERE! But remember, not all mugs are created equal, the cheap ones tend to be copper plated and don’t hold up well. Most decent mugs are between $10 and $20 each. In a pinch, a stainless steel tumbler or Collins glass with ice can be used to serve the drink.

What Makes This Moscow Mule Recipe The Best?

~ Shaken – Most recipes will call for the drink to be mixed in the glass. However, I prefer using a cocktail shaker to start because I like my vodka and lime juice to be nice and chilled when it hits that copper mug.

~ Fresh Ginger – Most recipes call just for the ginger beer, but I believe you can take the flavor one step further by adding a couple of slices of fresh ginger to the mix. Some people will add minced ginger, but I’m not a fan of this. There’s nothing more unpleasant than sucking up one of those pieces of ginger through your straw. Total mouth-fire, no thanks.

~ Fresh Limes – You don’t want to cut corners with bottled lime juice when it comes to this cocktail, splurge on fresh ones and squeeze lime juice directly into the mug before dropping in the rest of it.

~ Mint – Now, this isn’t a part of the traditional recipe, but ginger is strong. Therefore, I think that adding a sprig of mint near your straw to breathe in while you sip helps balance the bite of the ginger beer.

~ Crushed Ice – I’ve had mules made with ice cubes and in my opinion, it just isn’t as good as when it’s made with crushed ice. I never feel like the drink ever gets quite cold enough.

What Kind of Ginger Beer Do You Use?

How To Make a Virgin Moscow Mule:

It’s really easy to make a virgin version since ginger beer isn’t alcoholic and vodka is generally flavorless and easy to remove without changing the flavor of the drink. You can either add extra ginger beer or lime juice if you like or simply remove the vodka and keep the initial measurements.

I created a fun little group on facebook and I’d love for you to join in! It’s a place where you can share YOUR favorite recipes, ask questions, and see what’s new with Sugar & Soul (so that you never miss a new recipe)! If you’d like to check it out, you can request to join HERE. 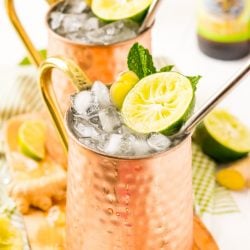