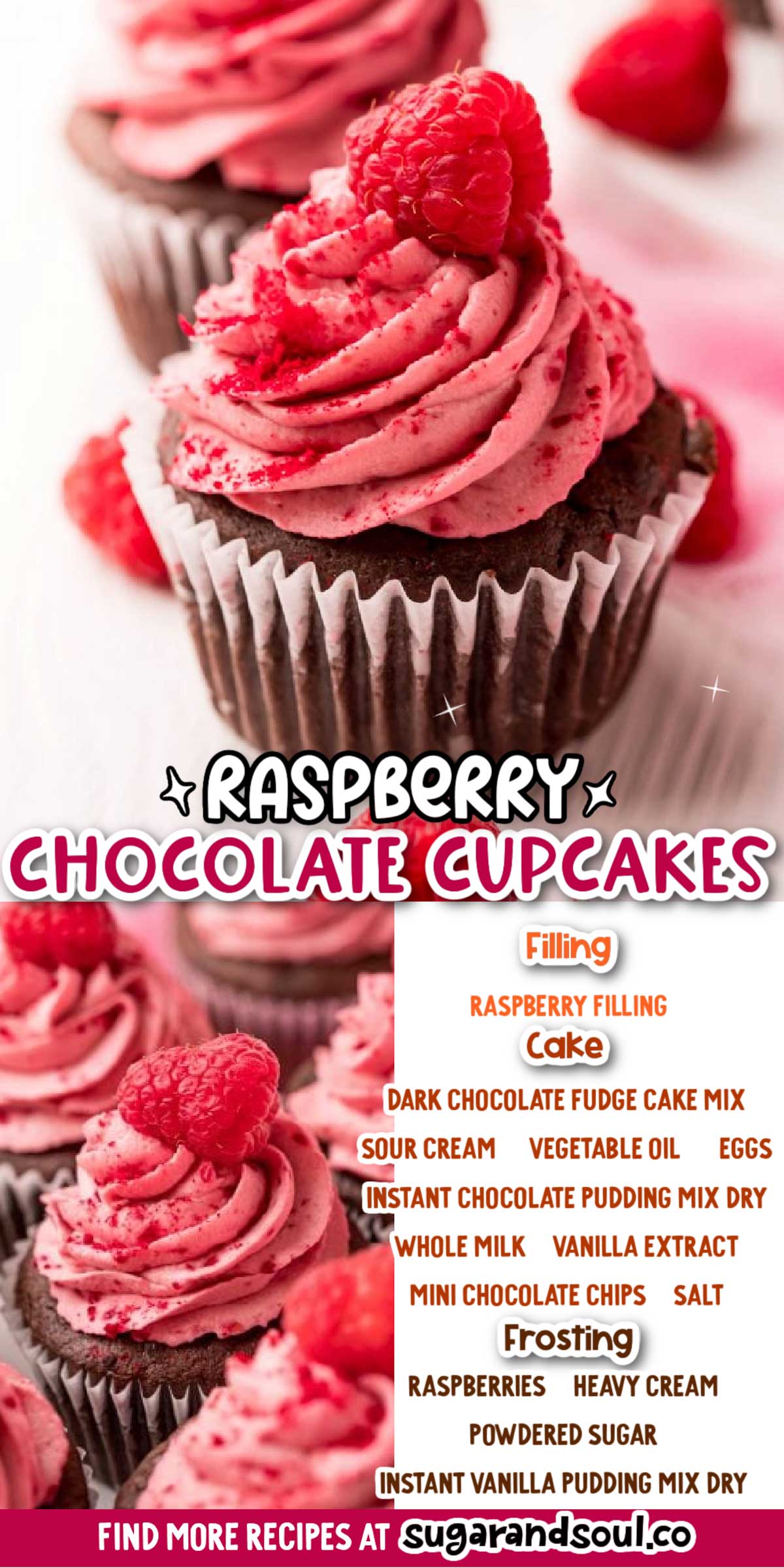 These Chocolate Raspberry Cupcakes have a raspberry-filled center that are topped with a light and fluffy raspberry vanilla cream frosting! Serve these delicious cupcakes to friends and family in under 35 minutes!

On the search for the perfect cupcake recipe? My homemade Chocolate Covered Strawberry Cupcakes or easy-to-make Golden Oreo Cupcakes are both delicious options that won’t disappoint!

These Chocolate Raspberry Cupcakes are absolutely to die for! From the easy-to-make, rich and moist chocolate cupcakes, to the perfectly tart raspberry-filled centers, this dessert won’t let you down in the least bit!

However, the very best part of these cupcakes may very well be the incredibly fluffy and creamy Raspberry Vanilla Crème Frosting! It tastes exactly like a Raspberry Cream Saver and it’s absolutely phenomenal!

Don’t be surprised when you find yourself making only the raspberry frosting recipe just to eat it straight from the bowl! Yes, it’s THAT good!

5 Reasons Why I Love This Recipe!

Then the center of each cupcake gets taken out using a cupcake corer. The center then gets filled with raspberry filling, you can choose between homemade Raspberry Filling or storebought!

The raspberry-filled cupcakes then get topped with a delicious swirl of raspberry cream frosting! Made with freeze-dried raspberries, heavy cream, powdered sugar, and instant vanilla pudding mix, this raspberry frosting really completes this dessert!

Once your cupcakes have been cored, filled, and frosted you can top each one with fresh raspberries!

How To Make Chocolate Raspberry Cupcakes

Store these Chocolate Raspberry Cupcakes in an airtight container in the refrigerator. Once they’re frosted I recommend enjoying them within 24 hours.

What Can I Substitute The Sour Cream For?

The sour cream in this recipe really ensures these chocolate cupcakes come out perfectly tender and moist! But if needed, you can swap out the sour cream for Greek yogurt!

What Kind Of Pudding Should I Use In These Recipes?

You need to use instant pudding. Cook and serve pudding does not work in the cake or frosting recipes!

Do I Need To Prepare The Pudding Before Adding It In?

Nope! You simply just use the pudding powder mix. So easy, right?

What Can I Use If I Don’t Have A Cupcake Corer?

No worries! You can also carefully remove the centers of the cupcakes by using a small pairing knife and small spoon!

Having a batch of these Raspberry Chocolate Cupcakes on hand is perfect for my sweet tooth but dangerous for my waistline! Check out more dangerously delicious cupcake recipes that I think you’ll really enjoy just as much as these ones! 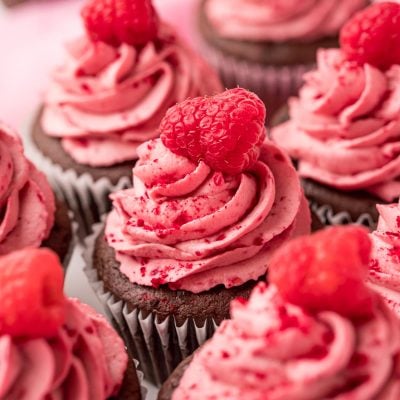