Red Velvet Cake, aka President Snow’s White Rose Cake, is a red velvet cake frosted in cream cheese buttercream and inspired by The Hunger Games trilogy and perfect for Valentine’s Day too!

First things first, can you believe that out of all my Food & Fiction posts, this is the first Hunger Games inspired recipe? Nuts, right! What might be even more unbelievable is that there was a time when I REFUSED to read the books, and you know how much I love books! When I worked at Yankee Candle in college, one of my coworkers also worked at Borders and had picked up the series after a recommendation, pretty soon our whole staff was reading them. Except for me.

So here’s the thing, I have this problem. If everyone is raving about it, I tend to shy away from it. It was three years before I finally watched Avatar (and it was awful if I do say so myself) and I still won’t watch Orange is the New Black, yeah, yeah, yeah, try to convince me all you want, but it’s just not going to happen. Shortly after everyone had finished the first two books at work and before the third had come out, Matt asked me for a book recommendation and I told him everyone was reading and ranting and raving about this new series and it sounded right up his alley.

Well, it was right up his alley and eventually, I got suckered into reading it. And by suckered I mean I read all three books in less than 24 hours and may have skipped a few classes and not slept at all because let me tell ya, this series is AMAZING! I’m sure most of you already know that, but for those of you who still haven’t read them… eh hem, Mom… the time is now!

The books were amazing and the movies have been great, but Matt and I can’t help but feel like people have lost interest. Is this the case, are we no longer excited? I for one am PUMPED! You see, Mockingjay was my favorite installment in the series. I know most people prefer the games and the third book gets seriously dark, not that teenagers killing each other wasn’t dark already, but book three really pulls the feels out of you. “Real or Not Real” – cue tears.

Honestly, though, I can’t help but feel like another chapter is getting ready to close with this final film. Just like Harry Potter, How I Met Your Mother, and True Blood. I’m so glad I found Outlander this past year and that Game of Thrones is still going strong because I’d be lost!

Okay, okay, let’s get back to this cake, shall we? I bet you’re probably wondering how a red velvet cake ties into The Hunger Games, right? Well, I thought it was a pretty clever bit of inspired baking myself. You see, in the series, President Snow is always surrounded by white roses. He’s always wearing them in lapel he drops them on District 13 after the bombing and leaves them in Katniss’ home. But they’re not normal white roses, their fragrance has been enhanced to cover the smell of blood. Hence red velvet cake in the inside and white cream cheese roses on the outside… pretty poetic, right?

Originally I was going to do a white cake with a raspberry filling, but then last week Matt had an episode of Throwdown with Bobby Flay on and they were doing red velvet cake. Since I don’t have the best of luck with white cakes and I’ve never made a red velvet one from scratch, I thought this would be a fun opportunity to give it a go! So I used Cakeman Raven’s recipe and the results were pretty freakin’ delicious!

Well, I hope you guys are as excited as I am about the movie and if you haven’t read the books yet, there’s still time before the movie hits theaters next week! I will probably be bawling like a baby throughout most of it and I’ll be sad that it’s over, but I still can’t wait! My friends are sharing some other awesome Hunger Games inspired creations, so don’t forget to check them out after the recipe! 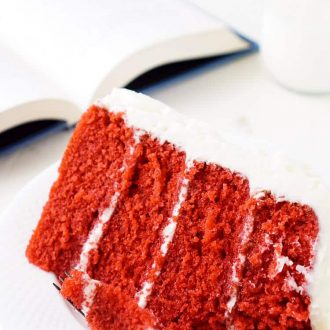 Check out the other great Hunger Games: Mockingjay inspired posts!

The Girl on Fireball Cocktail from The Love Nerds