This Sweet Potato Soup is a creamy and filling dinner recipe that’s made on the stovetop with onion, sweet potatoes, cream, stock, garlic, and spices! A comforting soup recipe for special occasions or chilly nights! 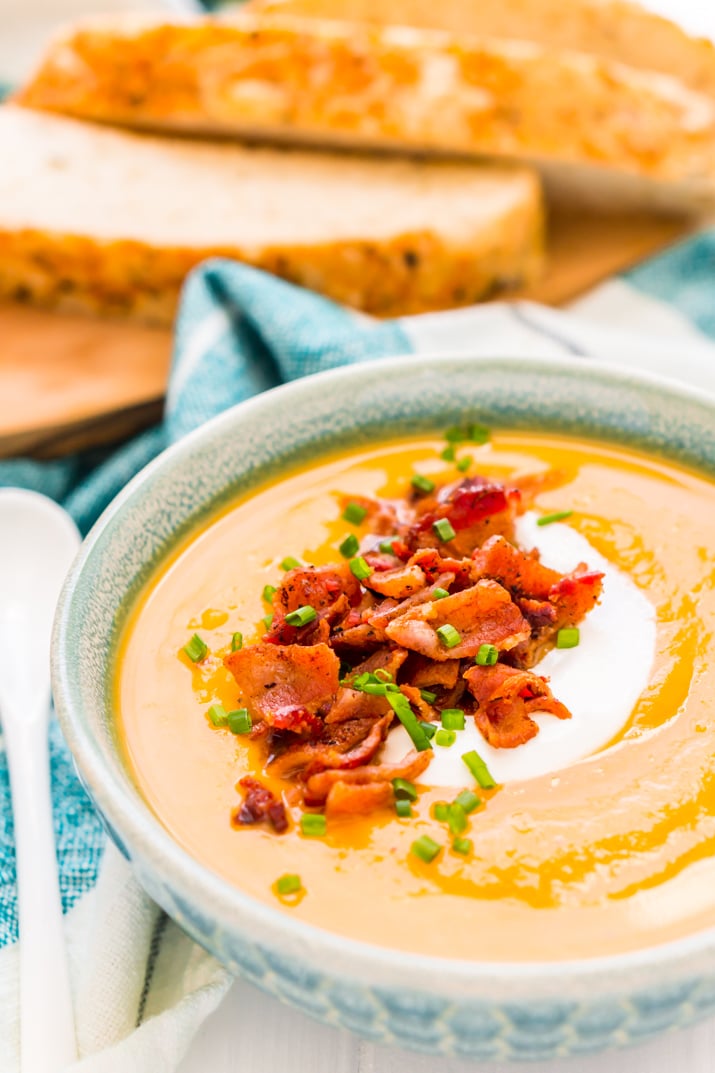 This Sweet Potato Soup recipe is inspired by my recent trip to Paris where we had one of the most amazing meals I’ve ever eaten. At the end of my European Road Trip, my husband met me in Paris for a few days to round out trip. Now, I’d never been to Paris before, but all my friends had and if there’s one thing Paris knows how to do, it’s food.

Everyone gave us a million recommendations, and my friend Vanessa said we absolutely HAD to eat at this one little restaurant called Les Papilles, and that it was very important that we make reservations. So I made them without even looking at the menu and began looking forward to what she called “The Best Meal of Her Life”. 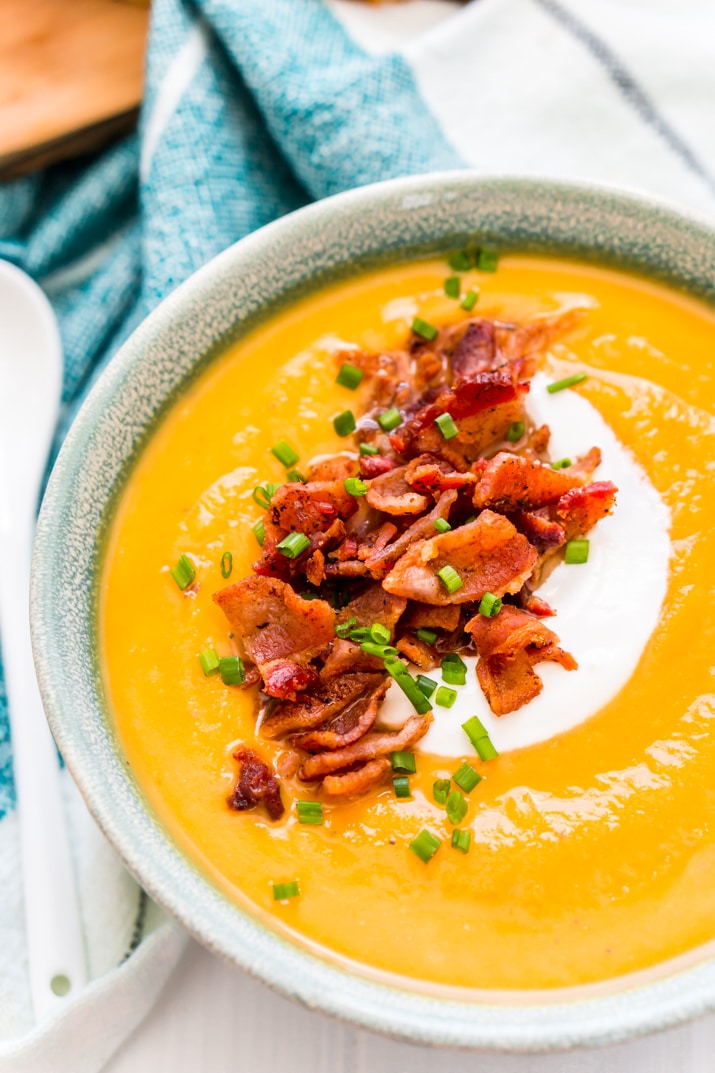 Well, then the night came that we were supposed to eat there and I decided to take a quick peek at the menu, except, there was none. So I texted Vanessa to find out that it’s a table d’hôte or “table of the host” restaurant. This means that it is a multi-course set menu with a set price attached to it. Is there anything scarier than a French Mystery Meal you don’t know the price of… good thing they served wine… but only by the bottle…

So we went, hesitantly, remembering how poorly our last prix fixe meal went and decided to just make the most of it. Well, after ordering the bottle of wine that the host picked for us with another mystery price tag, we were served one of the best meals of my life. And I have serious food regret that I didn’t have a bigger stomach to eat more of it. Especially the Sweet Potato Soup they served as our appetizer. 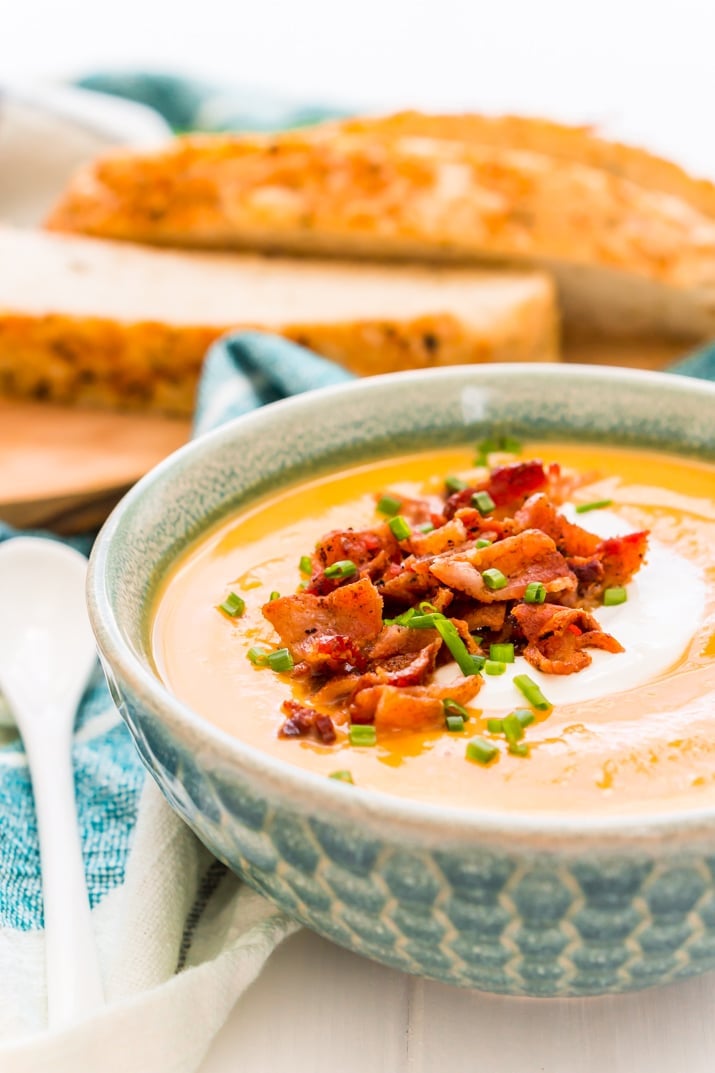 The bowls came out with a drizzle of olive oil, sweet potato puree, crispy sweet potato skin, crème fraîche, chives, and spices. And with it came a larger bowl of soup that you spooned over the heartier portions of the dish. Honestly, I’m pretty sure I was full after this Sweet Potato Soup (and still had 3 more courses to go), it was just so rich and creamy and filling and dipping soft slices of French bread in it was pure perfection!

And I think Matt liked the soup even more than I did, and he was determined to recreate it at home. So here we are. He tested it all week long in the week leading up to Christmas and we served it to our family at Christmas Eve dinner along with a prime rib roast. Everyone loved it! Our Sweet Potato Soup may not be quite as good as the one at the restaurant, but it sure comes damn close! 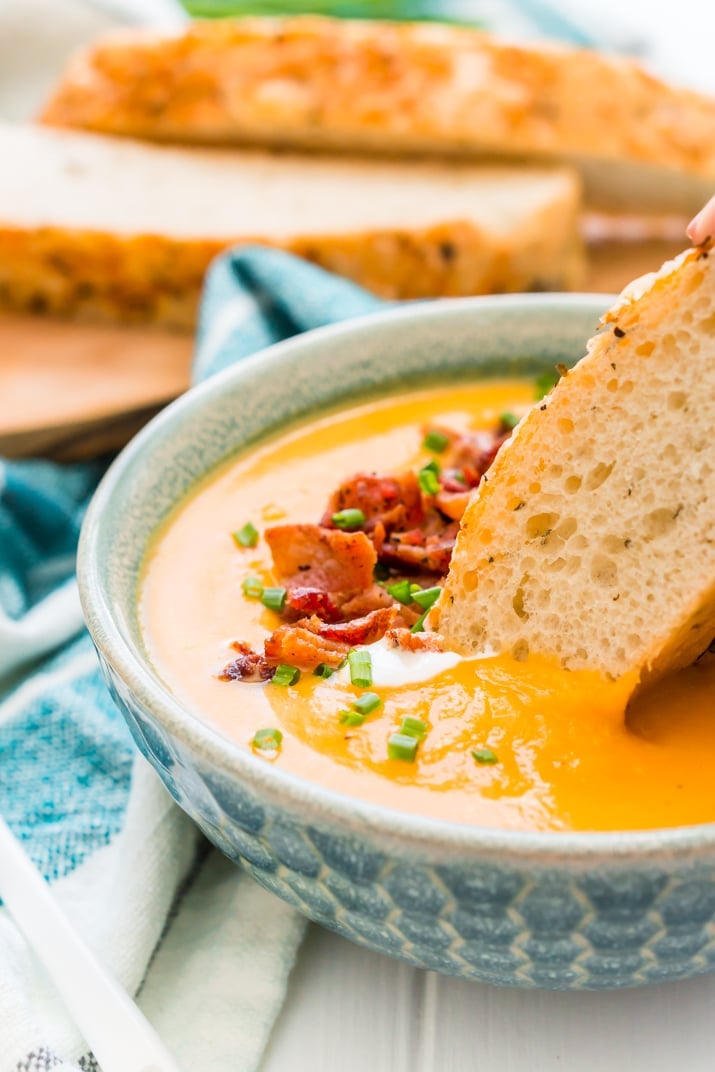 This recipe makes a fair amount of soup, so it’s great to serve as a first or second course at large dinners like we did, or it keeps well and can easily be reheated.

How To Make This Sweet Potato Soup Vegan: 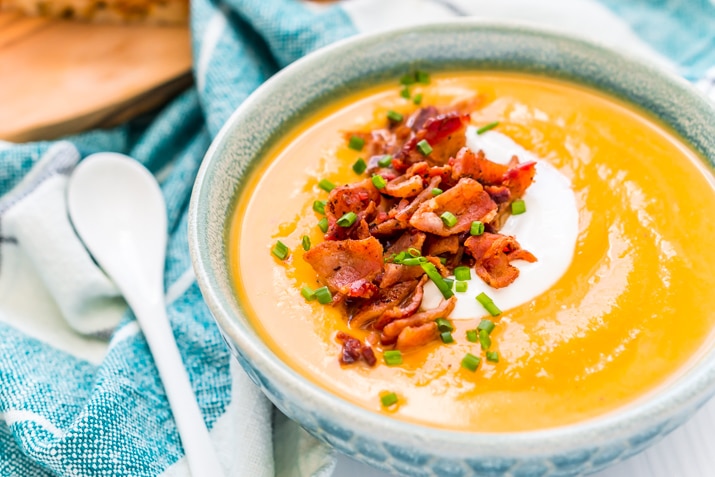 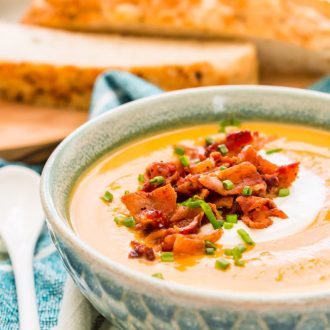